Atheism UK unequivocally condemns the killings of journalists and cartoonists at the Paris based magazine Charlie Hebdo on 7th January 2015. This was, primarily, a religiously motivated attack to avenge insults to the prophet Muhammad through his depiction in cartoons.

To stay within the law, publishers must decide when speech or expressions ridicules, offends, insults, abuses – or is hateful (1). The Charlie Hebdo satirists created images which had the potential to profoundly offend people of different faiths – they knew their work could also trigger violent breaches of the peace. But, had they drawn their cartoons in the UK (2), would they have been prosecuted under The Racial and Religious Hatred Act 2006 (3) – which says that threatening (but not insulting or abusive) behaviour is unlawful?   In law, the Act, which applies to England and Wales, states that “a person who uses threatening words or behaviour, or displays any written material which is threatening, is guilty of an offence if he intends thereby to stir up religious hatred.” (3,4) If the French had the equivalent of the 2006 Act, would the gunning down of Charlie Hebdo have taken place? (5) 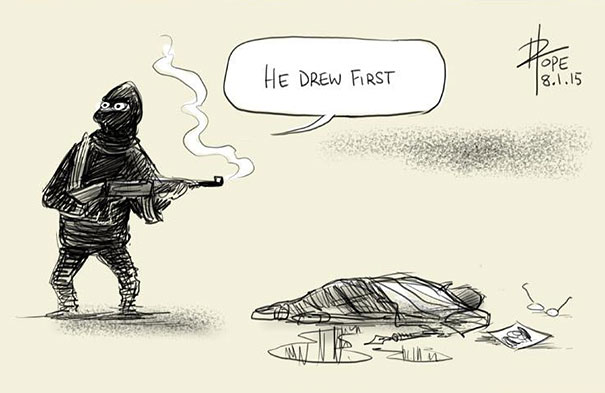 Many of the links below are to articles that debate the limits to freedom of expression and which discuss our fears of violent extremism.

Our sole objective is the advancement of atheism. From this, we derive our key principles, which in turn inform our policies and strategies. Atheism UK’s ultimate goal is the end of religious faith – the false and irrational belief that God exists – and of religion, the social manifestation of faith. We campaign, from an atheist perspective, against the false and pernicious claims of religion, its privileges and its malign practices. We reject the notion that faith and religion should not be questioned, and we seek to create an environment of atheistic thought.