This article reviews the ‘varieties of atheism’. After looking at several definitions of atheist and atheism, I look at strong v weak atheism and implicit v explicit atheism.

The terms ‘agnostic/agnosticism’ & ‘faith’ are defined here and here.

A person who disbelieves or lacks belief in the existence of God or gods (Oxford, (7)). This is the definition used by Atheism UK Council*.

One who denies or disbelieves the existence of a God (OED, (14)).

A person who does not believe in the existence of a god or any gods: one who subscribes to or advocates atheism (MW, (9)).

A person who believes that God does not exist (MW, (9) – definition for English Language Learners).

Disbelief or lack of belief in the existence of God or gods. (8)

Boghossian notes that the term ‘atheist’ is contentious:

“Of all the terms used in this book, none is more problematic, more contentious, more divisive, or more confusing than the term “atheist.” This confusion is understandable given that the word “theist” is contained in the word “atheist.” It is thus natural to assume a type of parallelism between the two words. Many of the faithful imagine that just as a theist firmly believes in God, an a-theist firmly disbelieves in God. This definitional and conceptual confusion needs to be clarified.

In this 2003 book Baggini says that ‘Atheism’ is very simple to define:

Strong atheism (also known as positive atheism and hard atheism) is atheism that asserts that no deities exist. (1)

Weak atheism (aka negative atheism and soft atheism) is atheism where a person does not believe in the existence of any deities and does not explicitly assert that there are none. (1)

Strong and weak atheism are distinct from the categories of implicit and explicit atheism, also relating to whether an individual holds a specific view that gods do not exist. (1)

All implicit atheists are included in the weak atheism categorization. Those who do not believe any deities exist, but do not assert such non-belief, are included among implicit atheists who include: children and adults who have never heard of deities; people who have heard of deities but have never given the idea any considerable thought; and those agnostics who suspend belief about deities, but do not reject such belief. (1) 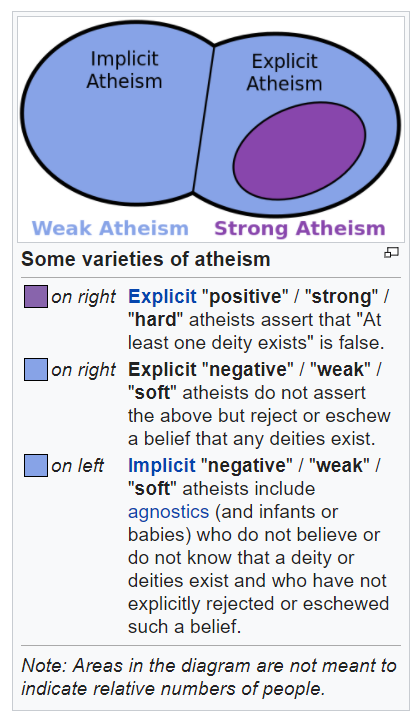 Varieties of Atheism – Spectrum of Atheist Probabilities by Richard Dawkins

Richard Dawkins in The God Delusion, describes people for whom the probability of the existence of God is between “very high” and “very low” as “agnostic” and reserves the term “strong atheist” for those who claim to know there is no God. (1) He categorizes himself as a “de facto atheist” but not a “strong atheist” on this scale. (1,3) Richard Dawkins posits that “the existence of God is a scientific hypothesis like any other.”

Dawkins goes on to propose a continuous “spectrum of probabilities” between two extremes of opposite certainty, which can be represented by seven “milestones”. He suggests definitive statements to summarize one’s place along the spectrum of theistic probability. (4) These milestones are:

Dawkins argues that while there appear to be plenty of individuals that would place themselves as “1” due to the strictness of religious doctrine against doubt, most atheists do not consider themselves “7” because atheism arises from a lack of evidence and evidence can always change a thinking person’s mind. In ‘The God Delusion’, Dawkins self-identified as a ‘6’ (3), though when interviewed by Bill Maher (5) and later by Anthony Kenny (6), he suggested ‘6.9’ to be more accurate. (4)

Dave Silverman is President of American Atheists. In his 2015 book ‘Fighting God: An Atheist Manifesto for a Religious World’ says (13):

It’s an unfortunate situation. Even some major sources of information give the wrong – or at least an imperfect-  definition of the word atheist:

1. Merriam-Webster defines an atheist as “a person who believes that God does not exist.” (MW, (9) – definition for English Language Learners). Wrong.

2. The Free Dictionary describes an atheist as a person who “absolutely denies” the existence of God or any other gods (15). Nope.

How do we win a battle with words when the words we use are wrong? How do we organize atheists when most of the atheists don’t even know they are atheists because they’ve been given wrong information? The Oxford English Dictionary,

thankfully, gets it right: an atheist is “a person who disbelieves or lacks belief in the existence of God or gods” (7) (emphasis mine). So we begin this book with three different reliable sources, giving three different definitions for atheist— how do we know which is correct? There is a big difference between “lacks belief” and “absolutely denies,” so we need to look at the word and see its etymology for support.

As stated perfectly at defineatheism.com: “Absence (rather than opposition) is indicated by the ‘a-’ prefix, meaning ‘without,’ hence ‘atheism’ can be concisely characterized as ‘without theism.’” (17)

Atheism is not an affirmative belief that there is no god nor does it answer any other question about what a person believes. It is simply a rejection of the assertion that there are gods. Atheism is too often defined incorrectly as a belief system. To be clear: Atheism is not a disbelief in gods or a denial of gods; it is a lack of belief in gods.

Atheism is not a belief system nor is it a religion.

Some groups will use words like Agnostic, Humanist, Secular, Bright, Freethinker, or any number of other terms to self identify. Those words are perfectly fine as a self-identifier, but we strongly advocate using the word that people understand: Atheist. Don’t use those other terms to disguise your atheism or to shy away from a word that some think has a negative connotation. We should be using the terminology that is most accurate and that answers the question that is actually being asked. We should use the term that binds all of us together.

If you call yourself a humanist, a freethinker, a bright, or even a “cultural Catholic” and lack belief in a god, you are an atheist. Don’t shy away from the term. Embrace it.

Not all non-religious people are atheists, but…

In recent surveys, the Pew Research Center has grouped atheists, agnostics, and the “unaffiliated” into one category. The so-called “Nones” are the fastest growing “religious” demographic in the United States. Pew separates out atheists from agnostics and the non-religious, but that is primarily a function of self-identification. Only about 5% of people call themselves atheists [Editor: aka ‘convinced atheists’], but if you ask about belief in gods, 11% say they do not believe in gods. Those people are atheists, whether they choose to use the word or not.

A recent survey from University of Kentucky psychologists Will Gervais and Maxine Najle found that as many as 26% of Americans may be atheists. This study was designed to overcome the stigma associated with atheism and the potential for closeted atheists to abstain from “outing” themselves even when speaking anonymously to pollsters. The full study is awaiting publication in Social Psychological and Personality Science journal but a pre-print version is available here.

Even more people say that their definition of “god” is simply a unifying force between all people. Or that they aren’t sure what they believe. If you lack an active belief in gods, you are an atheist.

Being an atheist doesn’t mean you’re sure about every theological question, have answers to the way the world was created, or how evolution works. It just means that the assertion that gods exist has left you unconvinced.

Wishing that there was an afterlife, or a creator god, or a specific god doesn’t mean you’re not an atheist. Being an atheist is about what you believe and don’t believe, not about what you wish to be true or would find comforting.

All atheists are different

The only common thread that ties all atheists together is a lack of belief in gods. Some of the best debates we have ever had have been with fellow atheists. This is because atheists do not have a common belief system, sacred scripture or atheist Pope. This means atheists often disagree on many issues and ideas. Atheists come in a variety of shapes, colors, beliefs, convictions, and backgrounds. We are as unique as our fingerprints.

The Oxford Dictionary defines antitheist as “A person who is opposed to belief in the existence of a god or gods.” (19)

‘Atheism is very individualistic. Whereas religions unify their members with a core set of beliefs and behaviors, atheists are united simply by a lack of belief in gods. This absence of a belief in gods can take many forms. Some atheists believe strongly that there is no god; others simply are not convinced that one exists. Other than that, atheists subscribe to a wide spectrum of ideologies and philosophies as they see fit’ (21).

*: to be ratified by Atheism UK Council.