Some people ask, “Why is the Atheism UK organisation necessary?” or “What do you do that other organisation like the National Secular Society (NSS) or Humanists UK aren’t already doing?”  The main answer to this is that none of these groups actually promote atheism. They do not, as a matter of course, challenge religions directly, question the validity of the concept of faith, or criticise pronouncements made by the religious institutions. At Atheism UK, we challenge religious claims and the propagation of religious faith. Our strapline is ‘Challenging Religous Faith’. 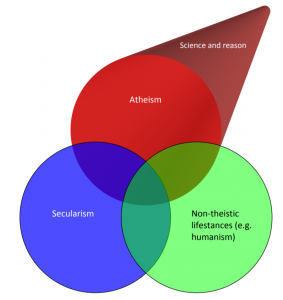 At the November 2009 NSS Annual General Meeting, its President, Terry Sanderson, stated that it was not their job to promote atheism. He explained that the non-theistic movement is made up of three “arms”. Atheism UK has modelled this into a simple Venn diagram as a graphical aid to differentiate where we fit in as an organization (please note this diagram is schematic and not to scale).

Each of the circles represents the following movements:

Secularism is the political movement to separate church and state, and to challenge and remove religious privilege.

Non-Theistic “Lifestances” are more positive “alternatives” to faith and religion, such as humanism. They promote ethical systems, ways of thinking and ways of life.

Active atheism is the challenging of faith – the belief, in the absence of evidence, that God exists – as a bad thing per se. From this follows the challenging of religion, its doctrines, pronouncements and teachings. Until now there has been no distinctively atheist organisation in the UK, which is why Atheism UK was formed.

At Atheism UK, we support and promote secularism, and we have common ground with non-theistic life-stances – hence the overlap. We work with these organisations, where appropriate. However, Atheism UK does things that they do not (or will not) do and vice versa.