Can Atheists win with kindness? by Matthew Connolly.

“Hello, I have never really been passionate about anything, I care about the world but if I am honest I have always been too apathetic to do or say much about it. As I get older I feel like this is changing. However, the one thing that has always been with me is my despair at religion and how is stunts humanity. I felt compelled to write something down, I didn’t really know what to do with it, so I have googled “Atheism” and here we are. So for what it is worth I have 1300 words on my world view and the take away is, Atheists need to work harder to be liked and explain the positives of humanity and Atheism – rather than be smug and brow beat people with cold logic.”

It feels to me at the moment we are reaching a point in history, where globalisation and the ability of the Internet to proliferate news and ideas have reached a saturation point of doom mongering. There is what seems like an hourly “religiously” motivated atrocity. However, I have two questions; is it really true that the end is nigh as it feels? And should Atheist’s be taking a more open and (whisper it) aggressive tone toward the world to try and explain to or convince the world there is another, more beautiful, more rational and more happy way to think…?

A feeling of Impending Doom 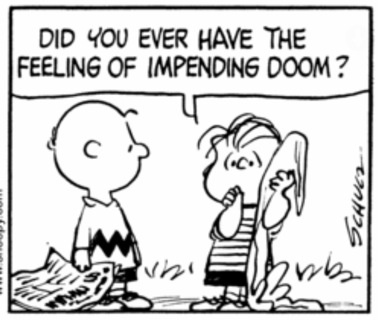 Firstly, I want to discuss this feeling of impending doom, the festering horror that seems to be around every corner, no matter what form of media you consume you will see a lot of death and horror and a few reactionary ‘keep calm and carry on’ type glib sound bites but not a great deal about what is going right in the world.

The fact of life is we are all of us, sadly going to die. This is always a painful event whether it be disease, accident or old age. Death is something we are hard wired to fear and avoid (rightly so, its why our gene’s are so successful) however we don’t need it rammed down our throat constantly, we evolved in a world that didn’t have twitter or Facebook or even the Daily Mail so we didn’t read or hear about destruction so continuously. So we do not have an in built coping mechanism for all this death, the best we have come up with via conscious thought is the concept of God or an afterlife (I’m getting to it) but this in my opinion is a poor substitute for truly getting to grips with the fact that we will die.

So to return to the point I am trying to make, although we hear a lot about what is and can go wrong, what we are missing is how well humanity is doing. Overall most metrics for human life are up across the board, life expectancy, child mortality, sexual liberation, equality – the list goes on and on. We face some huge hurdles, the biggest are probably global terrorism and destruction of the planet – but even these are being tackled by some extremely gifted and hard working people and we must maintain hope that we can overcome these threats.

Atheism can be positive

So to question two: how does Atheism fit into my attempt to be positive? Many people consider the concept of Atheism to be depressing or the destruction of a beautiful ideal. I personally believe the opposite to be true. Most of the large organised religions have some concept of a higher power, a potentially destructive but hopefully positive overlord who has particularly hard to define aims and wishes.  The seductive idea is that there is a place, after this one, where everyone you want to be there will be, with no more pain, no death (very importantly) and where the good guys come out on top! So Atheism says “sorry mate, but hard cheese, this is your lot, enjoy it or not as long as it lasts”. Except I don’t think we should think of it like that. What if we are saying, “this is it, we are it! What we are trying to do here now for each other is all that there is, look around, YOU are in some tiny way your own God, we can attempt to make this better for the people around us or after us. We are part of something amazing. Don’t give up on now, revel in it, work on it. You will live on as long as you are needed in others memories and the people you love will live in you as long as you need them in yours, after that what does it matter?”

We won’t live for eternity!

There is no need for something to last for an eternity. It’s an odd concept; none of us have ever experienced anything other than transient existence yet we yearn for an eternity of ‘heaven’. Can we stop to question this?

I personally find it liberating that there is no man in the sky who is my overlord, whether he be perfect embodiment of goodness or not. I think the problem is this idea is fed to people in times of weakness and that normally is when you are very young, it’s such an alluring concept, given to you when your brain is developing and it kind of fills that thirst for knowledge, the thing that keeps us alive and it also helps stop the confusion. What is this I don’t understand, oh God did it, that is easy. But it stunts us, it blocks us pushing for the next question the next answer. Imagine if all the effort and thinking that has gone into either religious thought or war had been put to use on science, understanding grief or simply how we as a species can enjoy life more? Imagine a world where Thomas Aquinas had dedicated his life to helping people get over personal loss rather than esoteric questions of the nature of God.

In school in the UK wee are given years of lessons on various religions, which is fine. However with a limited amount of time to teach what about this – lessons on what to do when life goes wrong. It is a fact that people you love will die, unfair things will happen to good people and you will have something horrible happen out of the blue. Depression and unhappiness are huge parts of life and yet we are left to work it out on our own largely – yet a huge amount of time and effort goes into talking about God’s – and some idea that you shouldn’t even worry or deal with it now because there is a better life after this one. Wow! People do find a way to get over horrible things, some use God but a lot don’t and this is where Atheism needs to step up and help people find an alternative to get through the pain more palatable than “one day after you are dead things will be okay”. When bad things happen there is still good things in this world, we just need to work together to bring them out for each other.

People should also remember that some religion begets extreme religion. Without moderates there would be fewer extremists. If you really DID believe in a God and someone said you MUST kill those who don’t agree with you and you are a broken human is some way – perhaps your village was destroyed by a bomb or you have a mental disease – isn’t it in some way rational to commit these horrendous things you hear about? If you really thought there was a man in the sky who had absolute power wouldn’t it make sense to do whatever twisted act you believed to be right? You remove God from the equation and suddenly the drive to listen to these horrible ideas is diminished. Terrorists are not all evil; some are sadly, very very misguided. They are, in their own way, rational. Terrorists are simply the logical extension of moderate or quiet religious belief.

The way forward for Atheism

So, I say, choose life! This life, here, now with each other. Atheists needs to love and empathise more – not always think they are cleverer than everyone else. We need to work together and patiently explain why we don’t think God makes much sense, rather than sit in our ivory towers looking down at the world. We are in it too so let’s get involved. Can we change the tone from a war of ideas to an empathetic discussion with a positive spin?

‘Afterlife’ – The Ultimate Kick Into The Long Grass