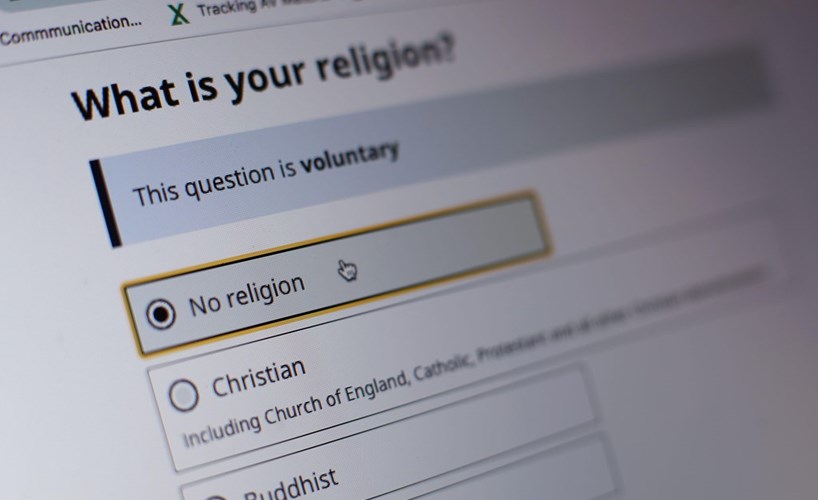 The Office for National Statistics (ONS) has released its data analysis for the ‘religion question’ included in the 2021 Census. The Census data applies to England and Wales (Scotland and Northern Ireland had separate censuses) and revealed the following key findings:

“For the first time in a census of England and Wales, less than half of the population (46.2%, 27.5 million people) described themselves as ‘Christian’, a 13.1 percentage point decrease from 59.3% (33.3 million) in 2011; despite this decrease, ‘Christian’ remained the most common response to the religion question.

Although the question on religion in the 2021 Census was voluntary, the ONS reports:

These trends reveal no surprises as numerous other surveys have shown over recent years. Church membership continues to fall and church attendance is at an all-time low, forcing more churches to close. Conversely, the number of people describing themselves as atheists, non-religious or having no interest in religion is increasing.

This is positive news for Atheism UK and anyone else who opposes undeserved religious privilege and interference in state affairs. That is, the declining number of ‘Christians’ will eventually affect how much influence the Church of England can legitimately claim.

However, I would suggest that the 2021 Census data does not reflect the true picture.

Atheism UK’s ‘Don’t Believe It – Don’t tick It’ campaign was launched in the run up to the 2011 Census. It still applies equally to the 2021 Census and any other forms or surveys that people are asked to complete. Here is a brief extract from the campaign text:

“Have you ever had a form to fill in, part of which asks “What is your religion?” Then, as a result of being asked that question, you tick the box marked ‘Christian’ or ‘Church of England’ or whatever, simply because you were once christened, or think that is simply what you should put, even if you don’t believe a word of it? Many people have and still do.”

Census results aside, this is one reason why the actual number of ‘Christians’ is inflated. This is further complicated by having an established church, the Church of England (Anglican) and the Monarch as the Head of the Church. How many times have we heard it said by politicians and church leaders, etc., that, “This is a Christian country”. They then often follow this with uninformed reminders of our ‘Christian heritage and values’. Anyone who takes the time to research our ‘Christian heritage’ can only conclude that it has been brutal and bloody. Even today, the established Church of England is riven with its own internal battles over interpretations of scriptural dogma.

It is no wonder that people are rejecting religion or are disinterested or apathetic to it The Church of England still holds a privileged position and continues to impose its influence and outdated values on society. The Church’s very public stance and in-fighting on issues such as abortion, homosexuality, same-sex marriage, etc., is turning people away in droves.

The Importance Of Understanding Evidence